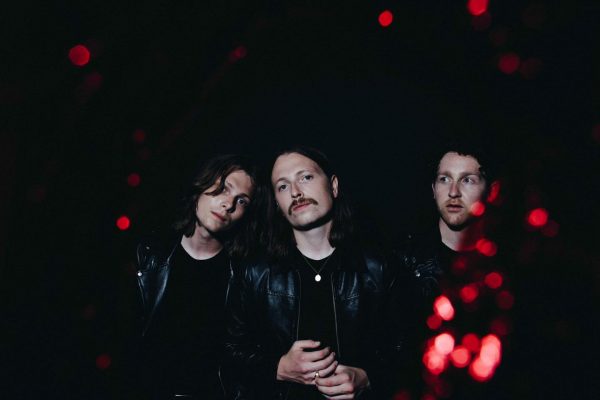 They will be your favorite band

«Glue is one of our favorite songs.»

The Pale White are the band we’ve been waiting for a long time. They have it all: youth, strength, cheek, attitude and good songs. Proof of all this is Glue, his new single. It sounds thunderous and seamlessly combines all of its strengths: powerful riffs, a punchy bass, a frenetic drum beat and a voice with a great swagger. With them the noise has come to stay.

But… who are the fucking The Pale White? Tom Booth on bass and brothers Adam on vocals and guitar, and Jack Hope on drums. They are a band from Newcastle, like Newcastle Brown Ale beer and like Sam Fender. He or Maxïmo Park may have put the city on the map, but maybe that will change in the coming months because they are going to be your next favorite band.

What does the Geordie trio have that others don’t? With the range of songs they have published so far, they have achieved their own characteristic sound and that is not available to everyone. They sound powerful from the first time, like a consecrated band.

A must-listen tune is Swim For Your Life, we promise you won’t be able to get it out of your head, just like you can’t with Medicine. Although our favorite is Take Your Time, it has become one of our favorites tunes of 2020 in its own right. The bass sound here reminds us of Pixies and that is something we love. They may also remind you of the dark compositional vibe of Interpol or the power of Queens of the Stone Age. Stay tuned for The Pale White because the future is his, just as one of his songs says. We talked to Tom, the band’s bassist, about Glue and much more.

First of all, I want to congratulate you on Glue. It´s a real banger!! Did you expect the welcome it is getting?

Thanks! It’s one of our favourite songs we’ve released yet. To be honest, we had a sneaking suspicion that people would really like it. We could feel the energy of the song when we were writing it and sort of knew it was a banger.  We’re always hopeful that people will like what we do, but we tend to just follow our collective gut and do what we want to and make the music we like.

Glue’s video is amazing too. The concept, image and video edition are so good. What was it like to record a video like this in a pandemic? Maybe I’m getting old, but every time I watch the video I can´t stop thinking about who had to clean up next. Did the showers really break?

Chris and Connor at BloodFilms (give them a follow) are both amazing at what they do. They have such a clear vision that really lines up with how we want our videos to feel and look. They also did the official video and the live video for “Take Your Time”. It’s been amazing getting to collaborate with them across all our recent visuals. It was difficult filming during a pandemic but luckily it was filmed just before we went into the second stricter lockdown, so that made it slightly easier. We were really careful that we took all the necessary precautions to make sure everyone was safe who was involved. We’re not ashamed to say that we made a smooth and convenient exit as the clean up began… directly after the shoot Jack was first in the shower, followed by Tom. The substance from both of them ended up completely blocking the shower before Adam got a chance to get in there. After some time, another shower was located which meant Adam managed to avoid having to trudge through London looking like a swamp monster.

Jolyon Thomas produces Glue and he gets a thunderous sound on the drums. How long have you been working with him?

We’ve been working with Jolyon since we released Medicine as a single in early 2019. We are big fans of so many of the records he’s been involved in and absolutely loved what he brought to our sound, and we’ve been working with him ever since. He has a really experimental and instinctual approach to recording. He goes mostly off the vibe of the room and has a really off the wall sense of humour. He’s a lot of fun to work with and has massively helped us try things we’d maybe have been hesitant to try before. Aside from Jolyon’s wizardry, getting a thunderous drum sound is pretty easy considering Jack hits the kit so hard.

After listening to Take Your Time and Glue I can only say that you have made a good use of your time during the lockdown. Although like everyone else, I guess it will have delayed you too many plans. May I ask you when will the album be ready? Could you tell how it will be?

We know people have been waiting for an album from us for quite some time. When that day comes we can guarantee that it won’t disappoint. We want it to be a varied listen and show all the different sides that we possess as a band. There will most definitely be something for everyone… if and when an album appears…

Both songs (Take Your Time and Glue) sound different from the rest of your songs. It’s a more mature sound. What has changed in you since the first songs?

We’ve been a band for so long that it’s only natural that we would develop as songwriters and stretch the boundaries of our sound. It keeps it interesting for us and the people who listen to us. It would be impossible for us to write songs like we did when we first started and we don’t think anyone would be interested if we had continued to do that.

You have almost twenty songs published, and all of them are great. I suppose it will be hard to think about what songs are left out the album. I hope “Reaction” stays in because it’s one of my favourites. Although, I have heard that you are not proud of Downer, why?

We want people to have a lot of new material to dig into once an album arrives. We’re very proud of what we’ve released and those songs will always be available to listen to online… we’ll also not shy away from playing some of them live (when we can eventually)… but as a band we want to always try and progress and always be moving forwards. “Downer” is probably collectively our least favourite song. It’s just a bit immature and feels a bit formulaic. I think every band has a song that they’re not particularly bothered about, and I think that’s ours.

I like the “Polaroid” concept. If you could, what moment of your career would you capture forever?

Probably one of our sold out Newcastle shows. It always feels amazing to receive such a warm welcome from your hometown crowd.

Your influences are clear: Pixies, Interpol, Queens of the Stone Age or The Black Keys. But, despite that, I think you have your own recognizable sound and that’s not something other bands are capable of. For you, what does “The Pale White” have that others don’t?

I don’t think we ever planned or talked about how we were going to sound as a band when we first started. The music we make and the sound we have just comes from the three of us being in a room together. We all pull from different influences and bring in our own take on what we do, so I think that’s where it comes from. I suppose we’re too invested in the band and too close to it to really know what it is we do.

You have been opening act for great bands like “We Are Scientists” or “The Libertines”. What have you learned from them?

Every band has a different approach to what they do and it’s invaluable being able to open up for established artists and see behind the curtain at what’s made them a success. Professionalism and passion tends to be the consistent thing amongst most of them, but everyone has their own unique thing. We Are Scientists are just incredibly kind and funny blokes. They have such a natural rapport with the crowd and connect to their audience that way. The Libertines have a mythology surrounding everything they do. I think they could turn up and do anything and their fans would love it. They seem to inspire devotion and have a message that people connect with, I guess. I think all you can do is be yourself and hope that people connect with what you’re doing.

We all (fans and press) agree that 2021 will be your year. What do you expect for this year?

To be honest, we’ll just be pleased if we get to step out on to a stage again. Lots of new music, hopefully lots of shows. Let’s all hope it’s better than this year has been!

We’ve always thought of ourselves as a band who’s music makes the most sense played live, so this year has been a pretty tough one for us. Hopefully be the middle of 2021 things will be up and running again. Our fingers are very tightly crossed!

This website uses cookies to improve your experience while you navigate through the website. Out of these, the cookies that are categorized as necessary are stored on your browser as they are essential for the working of basic functionalities of the website. We also use third-party cookies that help us analyze and understand how you use this website. These cookies will be stored in your browser only with your consent. You also have the option to opt-out of these cookies. But opting out of some of these cookies may affect your browsing experience.
Necesarias Siempre activado

Any cookies that may not be particularly necessary for the website to function and is used specifically to collect user personal data via analytics, ads, other embedded contents are termed as non-necessary cookies. It is mandatory to procure user consent prior to running these cookies on your website.